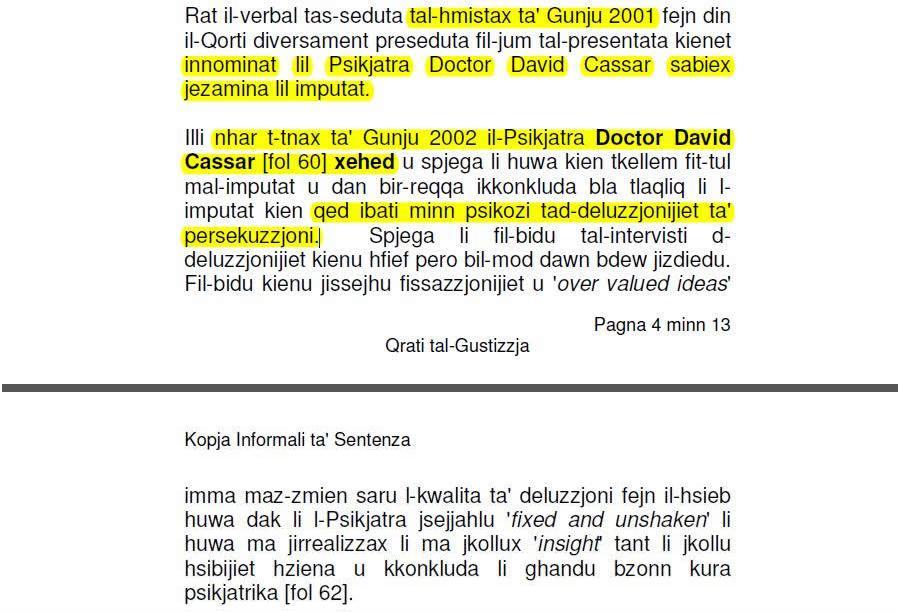 English translation:
Saw the script of the court sitting of 15th June 2001 where this Court presided by another in the day of presentation had nominated Psychiatrist Doctor David Cassar to examine the accused.
That on the 12th of June 2002 Psychiatrist Doctor David Cassar [fol 60] testified and explained that he had spoke for long with the accused and in detail concluded without doubt that the accused was suffering from psychosis of delusions of persecution. He explained that in the beginning of the interviews the delusions were light but slowly these began to increase. In the beginning they were called fixations and 'over valued ideas' but with time they became of the type of delusions where the thought was what the Psychiatrist calls 'fixed and ushaken' whereby he doesn't realize that he doesn't have 'insight' to the point that he has bad thoughts and concluded that he needed psychiatric cure [fol 62].

Note that the phrase "in the beginning of the interviews the delusions were light but slowly these began to increase" is also a blatant lie as illustrated by the graph below showing the dosages of daily pills he prescribed me. 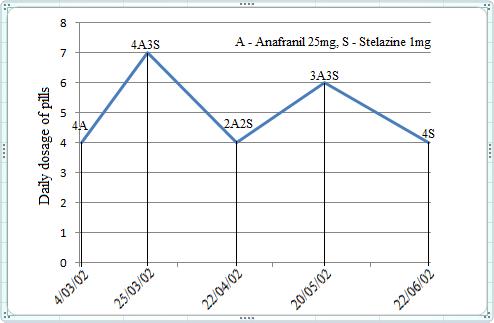 As can be seen the dosage reached a climax of 7 daily pills on 25/03/02, reduced on 22/04/02, increased again on 20/05/02 yet it didn't reach the climax of 25/03/02, and on 22/06/02, the day after I was seen by the 3 Psychiatrics on 22/06/02 including David Cassar himself, he reduced it again to just 4 daily pills (actually 2 pills Stelazine 2mg). Had the delusions he invented I was suffering from began to increase as he said in this Court sitting on 12/6/02, one would have expected him to have increased the dosage of pills progressively in accordance, not reduce it and end contradicting what he intentionally falsely testified in court, in other words a reduction in dosage meant that my delusions, if any, must have decreased and not increased as he intentionally falsely testified in Court. Common sense and logic thus tells you that such a blatant liar who, not in some remote village band club, but in no other than in a court room, during a court sitting, infront of the crucifix affixed prominently on the wall behind the magistrate himself, did not have it on his conscience to intentionally and so maliciously lie on me on one thing, for sure would not have hesitated to lie even further on other things, namely the mentioned "delusions of persecution" he so maliciously invented that I was suffering from. It truly shows how I ended innocently kidnapped and locked in a mental institution on that day of 12-Jun-02 because of his premeditated blatant lies and false testimony, because of the cover-ups of serious crimes he wanted to do. But it comes out that he who had labeled me a mental to discredit me and lessen my credibility, had in the process with all his lies and contradictions, lost the credibility of no other than he himself.

Also worth noting that the idea behind the words "in the beginning of the interviews the delusions were light but slowly these began to increase" was meant to make me pay it both ways: 1) of being depicted as mentally fit when I committed the wrong doings before the arrest and God knows how much they would have fined me with all the favouritisms the Magistrate had shown till then, 2) and of being depicted to have progressively become a mental afterwards to lessen my credibility if I come to reveal the abuses I suffered after the arrest depict them as if they were my imaginations, my "delusions." On the other hand I had argued with Cassar in the appointments I had with him prior to this court sitting of 12/6/02, that I was depressed without control of myself before the arrest to avoid responsability for my wrong doings, and to have successfully recoverd afterwards with the support of my family as proven in this almost one year since arrest where I behaved well and always respected the extreme conditions of bail amongst others. But everything was to take another direction after being seen by the 3 Psychiatrics on 21/6/02 for their court report: the fact that I kept emphasing that there were persons who witnessed the abuses I suffered including hearing Magistrate Carol Peralta threatining me with violence in that court sitting of 4/2/02, forced them to maliciously attribute me so much chronic and severe mental illnesses related to paranoia to further lessen my credibility that it would have been impossible not to have been a complete mental since long, possibly since birth, with Cassar even coming with the theory of being a disabled person with dopamine missing from my mind. It was yet another big contradiction with me, without any medication, working before arrest and continued working afterwards in a job of responsability and never had took just a single day as sick leave despite all the the illnesses and disabilities I was labelled with. I must have been really a unique case, of one in a million billion, not only unique in the whole world but also in the history of mankind, never before had ever existed someone with such contradictory characteristics. The Psychiatrists for sure merited the Nobel Price for medicine for such a great feat in their so blatantly false diagnoses of me as a mental.

How to discredit a person labelling him a mental

Given: One who is amongst others saying that in a court sitting he had, false evidence and tampering of evidence took place to make him loose the bail, that he was framed-up by presenting a Police statement in his name not with his true signature to the point that he was accused with falsifying of signatures, that in another court sitting he was threatened with violence by none other than the Magistrate himself in the court room. He is an obstinate guy who can't be easily silenced, he wasn't intimated and traumatized enough by the Magistrate with the threats of being smashed against the wall and even aggravated the situation, and any attempt to condition his mind and sedate him with pills proved futile because either the pills are ineffective or he is not taking them at all.

Current situation: He doesn't have any treatment order by the Court which obliges him by force to take the cure and the role of the appointed Psychiatrist is solely to write a report on his condition, but don't worry no one will take this into consideration, the Magistrate is an accomplice for his career in the judicary is at stake. Neither will anyone ask whether a scientific test say blood or urine test was used to detect the illnesses he is going to be attributed of suffering from. His lawyer has just renounced from remaining his lawyer and the Magistrate is about to appoint one as legal aid instead of another one whose turn it is specifically to continue in the steps of the first lawyer and not proceed on the abuses he is saying to have suffered.

Aim: To discredit him before it is to late, to further intimidate him and to cover-up the abuses he is saying to have suffered, especially important as it concerns crimes of persons in high position and friends of friends.

Method: Hastily make a court sitting. Say that he needs psychiatric cure as an excuse to lock him up in a mental institution where with the stigma such place carries will serve as a basis for what is yet to come. Prejudice the case labeling him a mental and to be suffering from an illness like psychosis (related words: fixation, obsession) of delusions (related words: illusion, hallucination, fantasy) of persecution to discredit him lessing his credibility making him appear as if he is imaging things. Appoint other psychiatrists to examine him so that everything appears to be running smoothly, knowing that a doctor does not contradict another one, a colleague, especially when the current Psychiatrist has been seeing the victim the last 4 months and for sure the other Psychiatrists will get the impression that current psychiatrist has already a clear picture of the victim on which they can rely without doubting him. Instruct the specifically appointed lawyer to send him a letter before he is going to be examined by the psychiatrists suggesting to him the only way forward is to take the pills they will prescribe him if he wants to ever obtain back liberty, that is accept the lie that he is sick or else despair remain locked up. Everything will appear to have been done in good faith, no suspisions at all, and even appear to have been really providential the magistrate appointed a psychiatrist to examine him because it makes you wonder where he would have ended without cure for all the chronic and severe mental illnesses they will subsequently label him with. Sic transit gloria mundi.