Menu to other web pages
Home Page (or click banner) Court sitting of 5-Jul-01 Court sitting of 12-Jun-O2 Letter from Commission for the Administration of Justice Lawyers 1 Lawyer 2 (this page) Lawyer 3 The poison of pills I never took from the very start Letter from Tribunal in 2005 (this page) The unfounded accusations Written in the Court sentence: used to find them already dead My Pets My research Malta Police Frame-Ups The fake Psychiatrists' reports and Magistrate Carol Peralta's revenge on me My court case which vanished from the Court Archives Emails and letters I sent Medical Council Members in 2017 Emails sent to Animal Welfare Unfounded hatred towards me, even ending with a death fatwa Impunity Malta Style Victims of Psychiatry in Malta Depicting poison as cure Money down the drain at Mount Carmel Hospital Who is Frederick Azzopardi? Contact

Letter by lawyer Tonio Azzopardi dated 20th June '02, the day before the Psychiatrists were going to interview me 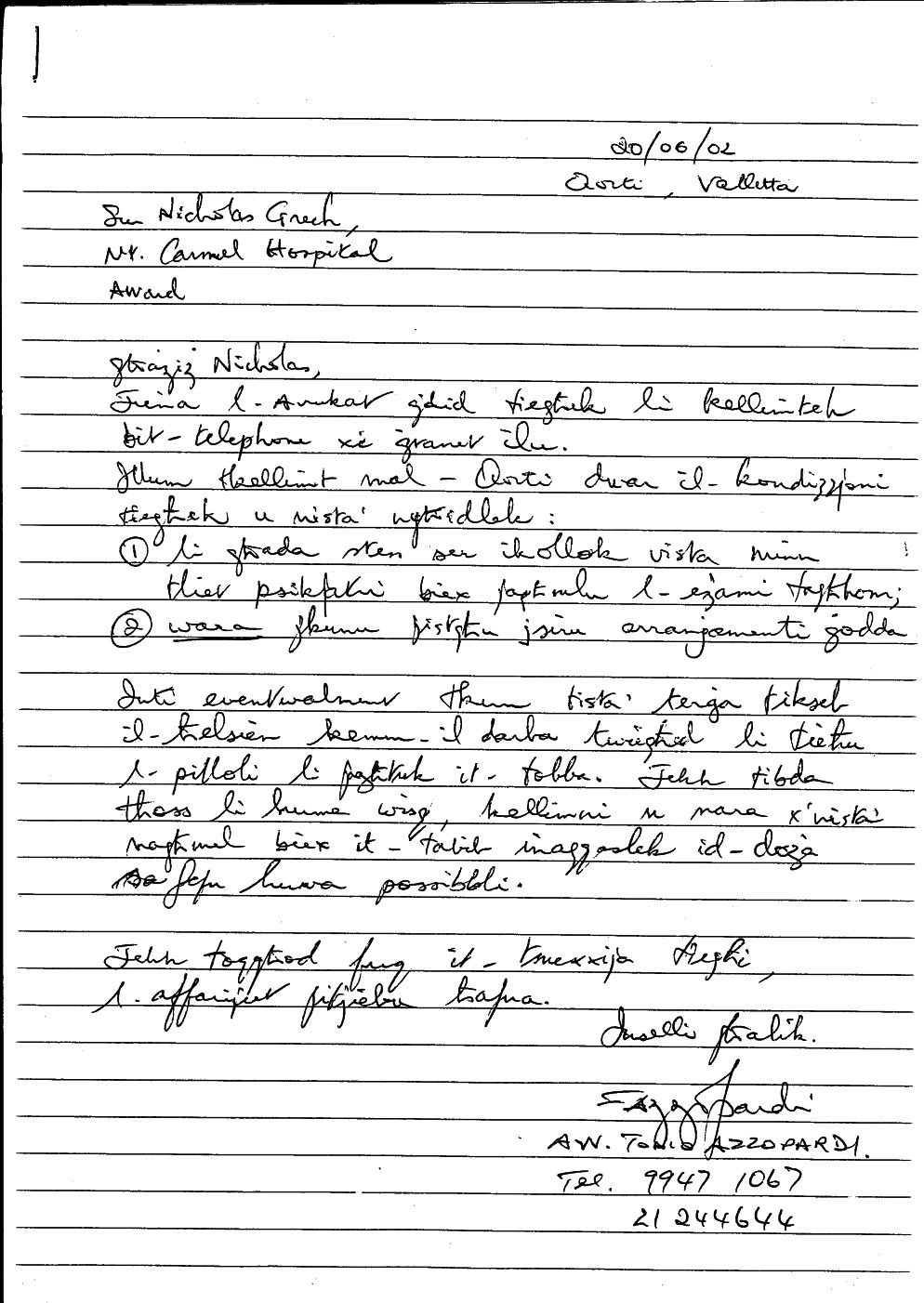 English translation:
I am your new lawyer who spoke to you on the telephone some days ago. Today I spoke with the Court about your condition and can tell you that 1) TOMORROW you are going to be be seen by 3 Psychiatrists, 2) later new arrangements can be made. You eventually would gain again liberty as long as you promise to take the pills that the doctors prescribe you. If you feel that they are too much, refer back to me and will see what can I do for the doctor to lower the dosage where possible. If you remain under my guidance, things will improve significantly. Lawyer Tonio Azzopardi.

To note the date of the letter, 20-Jun-02, and how lawyer Tonio Azzopardi, after "having spoken with the Court", with Magistrate Carol Peralta who had appointed him as my legal aid abusively instead of another one whose turn it was, knew beforehand, before the 3 Psychiatrics were going to see me the day after on 21-Jun-02 (note the word TOMORROW), that they were going to consider me as a mental and that Psychiatrist David Cassar was going to prescribe me some pills. This lawyer began deriding me from the very start, before even had the chance to explain him my case - he is literally instructing me to let them sedate me and "things will improve significantly," not for me of course not, ... but for Peralta himself and his friends of friends, for their crimes to be covered up be wiped out under the carpet as if never happened and I bear the consequences (the improvements for him) of being labelled a mental and end disabled, silenced, destroyed with pills ... and if necessary injections ... if I dare not follow his "guidance." He is even threatening me (extortion / rikatt) that the only way to obtain back liberty is by taking the pills. So much he is a fraudster, staging it as if he was defending me when in fact he was so vilely deriding me. This is yet another confirmation that the report by the 3 Psychiatrists was just staged up, everything was going to be dictated by David Cassar, and what means being prejudiced considered a mental once locked in a mental institution.

With a letter dated 9-Aug-06 I wrote the Commission for the Administration of Justice which had also the role of hearing complaints against lawyers (under the illustrious name of "Committee for the Lawyers of the Commission for the Administration of Justice"), and amongst others I mentioned how also in my case this Azzopardi used to charge me money for his services despite being nominated by the Court as my legal aid, I passed them 2 letters in which I had raised this point to him, and even sent them proofs with telephone recordings I made him where in that of 17-Jan-03 he is heard saying that "it has nothing to do with this" when I asked him if he needs more money. But obviously in the same way it did not take any action against Magistrate Carol Peralta for threating me of smashing me against the wall in a Court room, so much it didn't take any action against this lawyer (see also court plea, letter 1 and letter 2 explained in more detail here).