Menu to other web pages
Home Page (or click banner) Court sitting of 5-Jul-01 Court sitting of 12-Jun-O2 Letter from Commission for the Administration of Justice Lawyers 1 Lawyer 2 Lawyer 3 The poison of pills I never took from the very start Letter from Tribunal in 2005 (this page) The unfounded accusations Written in the Court sentence: used to find them already dead My Pets My research Malta Police Frame-Ups The fake Psychiatrists' reports and Magistrate Carol Peralta's revenge on me My court case which vanished from the Court Archives Emails and letters I sent Medical Council Members in 2017 Emails sent to Animal Welfare Unfounded hatred towards me, even ending with a death fatwa Impunity Malta Style Victims of Psychiatry in Malta Depicting poison as cure Money down the drain at Mount Carmel Hospital Who is Frederick Azzopardi? Contact 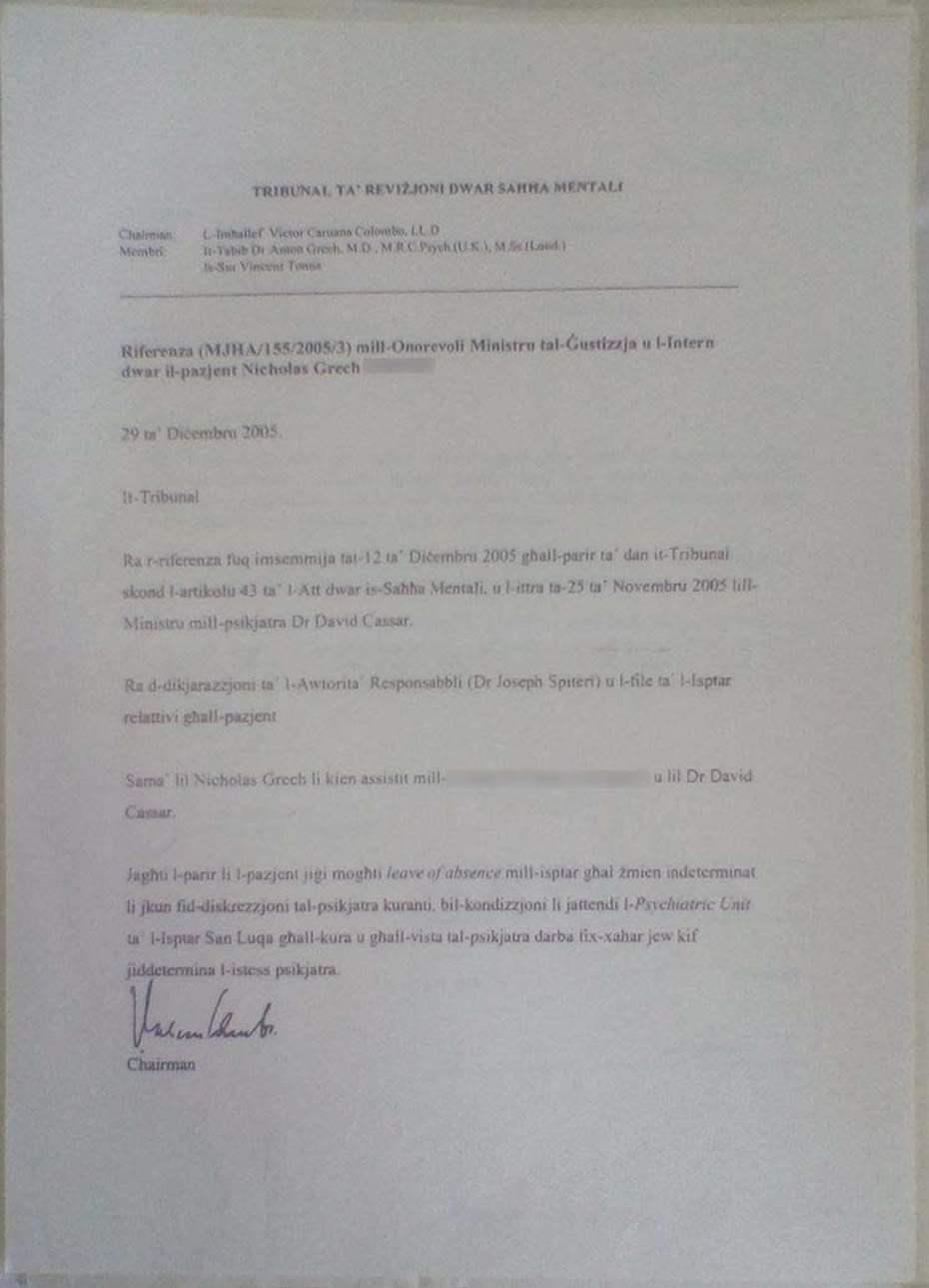 English translation:
The Tribunal:
Saw the reference mentioned above dated 12th December 2005 for the advice of this Tribunal according to Article 43 of the Mental Health Act, and the letter dated 25th November 2005 to the Minister from Psychiatrist Dr. David Cassar.
Saw the declaration of the responsible authority (Dr. Joseph Spiteri) and the hospital file relating to the patient.
Heard Nicholas Grech who was assisted by --- and Dr. David Cassar.
Gives the advice that the patient be given leave of absence from hospital for indeterminate time that is at the discretion of the caring Psychiatrist, with the condition that he must attend the Psychiatric Unit of Saint Luke’s Hospital for the cure and the appointments of the Psychiatrist once in a month or as determined by the same Psychiatrist.

... after I had been sentenced to Mount Carmel Hospital on 28-Jun-05 and effectively on the appeal on 21-Nov-05 on the blatant lies of Psychiatrist David Cassar to save amongst others Magistrate Carol Peralta the career.

I was eventually released from Mount Carmel Hospital on 21-Jan-06. Note that this day was a Saturday, they had literally expelled me, before the final approval by the then responsible Minister Tonio Borg had came, for ending passing time teasing patients. When phoned work to enter my Saturday evening shift duty, the engineer at the other end said he wanted to work it overtime, so had to waste another day unpaid leave and content myself entering work the day after, on Sunday.