My Court case of 2014 which incredibly disappeared from under the eyes of the same Court?


On 20th September 2019 I went to the Court to ask for the procedure that I had to go through to be able to make photocopies of my Court case of 2014. They directed me to an office just outside the Court on the left and was told to ask some lawyer to write me such plea in my name or else give it a try write it myself. I almost gave up but then I decided that rather than give some €100 to some greedy lawyer for such a small task, might as well give it a try myself as was suggested and went to a stationery to buy a scrapbook and a biro for just some €1 and wrote something myself. I went again to the mentioned office outside the Court with the letter shown below but was instead told to go with it to a certain Dr. Maria Dolores (Doris) Fenech who had an office in the 2nd or 3rd floor of the Court to the right of the lift to see if such letter was acceptable. So I proceeded to that office of Dr. Doris Fenech, who after making some phone calls, told me that everything was fine and directed me to go once again with the letter to that office just outside the Court to register my plea, shown below, as I did. 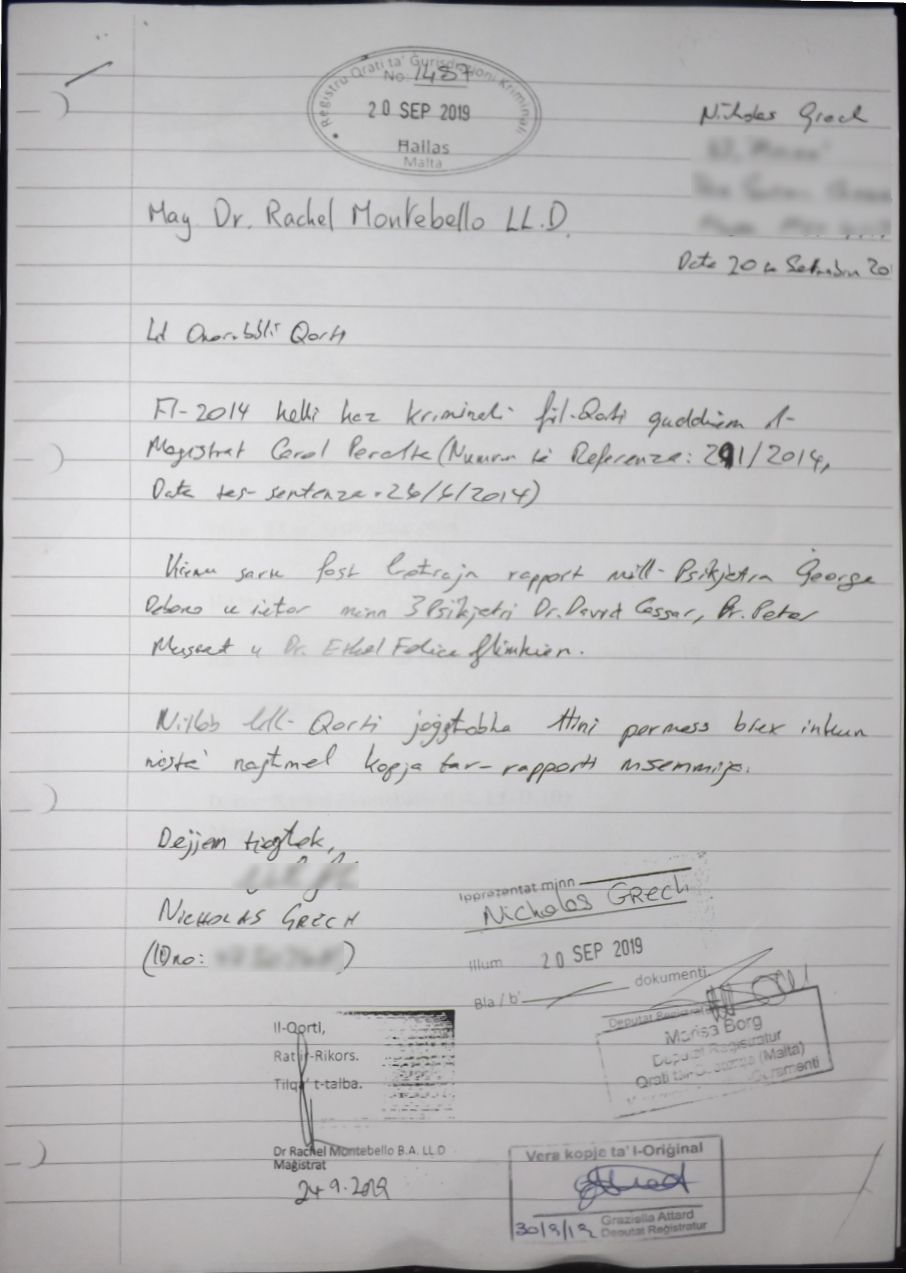 English translation:
To the Honourable Court,
In year 2014 I had a criminal case in Court in front of Magistrate Carol Peralta (Reference No.: 291/2014, Date of sentence: 26/6/2014)
Reports were made amongst others by Psychiatrist George Debono and another by 3 Psychiatrists Dr. David Cassar, Dr. Peter Muscat and Dr. Ethel Felice together.
I ask the Court to give me permission to be able to make copies of the mentioned reports,
Always yours,
Nicholas Grech

When in that office to submit this plea, was given a phone number of the office of a certain Judge Dr. Rachel Montebello, who had taken over from Peralta once he retired, and was told to wait some days and then phone this office to check if my plea had been accepted. The following was the reply to my plea by the Court: 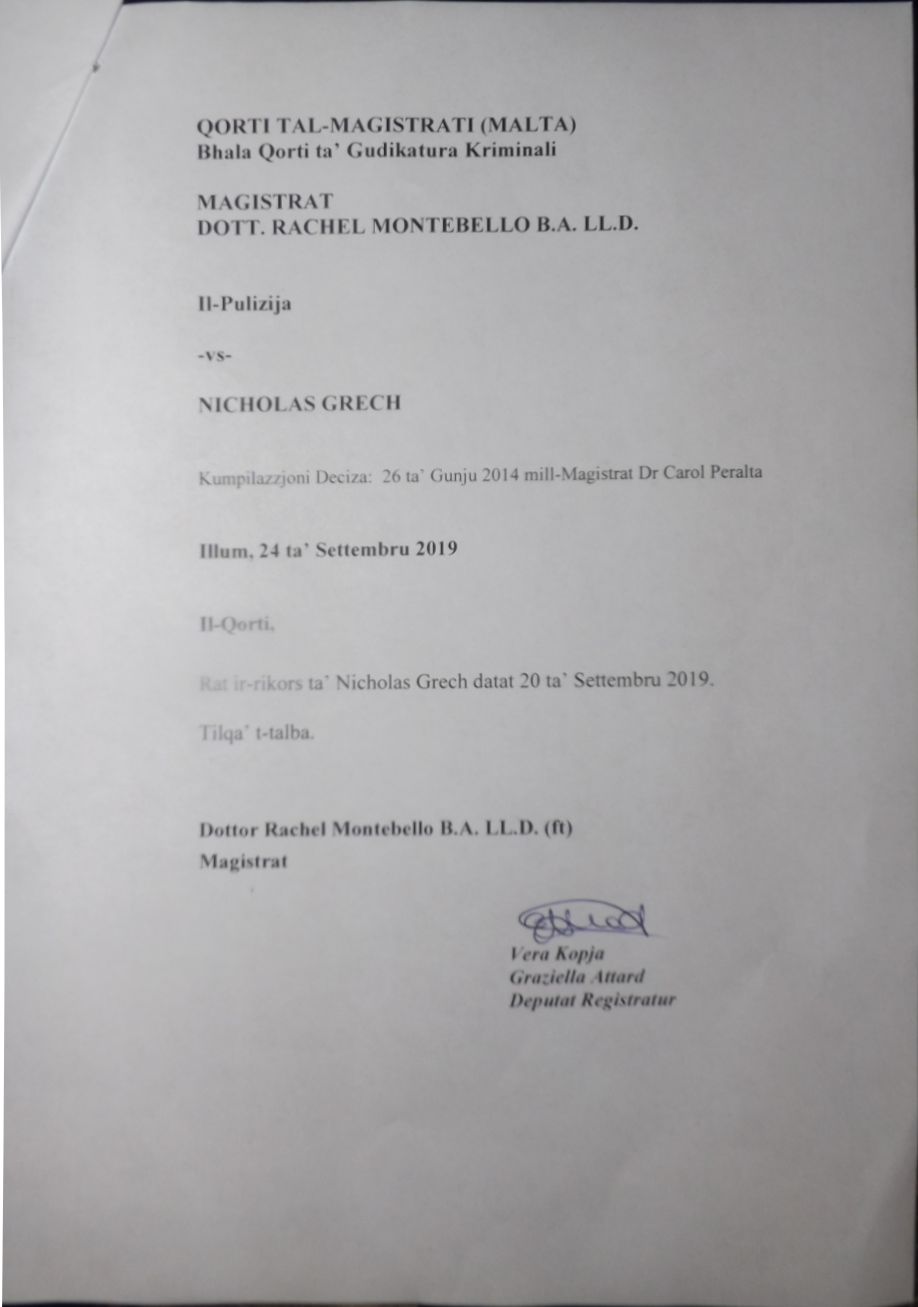 So once told on phone that my plea was accepted, in the beginning of October '19 went to collect the above letter to present it to the Court Archives to be able to do the necessary photocopies of my 2014 court case. But once down there, to my surprise a certain Gejtu came back saying he couldn't find anything and suggested to me to contact the already mentioned Dr. Maria Dolores (Doris) Fenech, who seems was responsible of the Court Archives, to go find it and investigate herself. She just told me to wait some days to check if it had ended in some wrong place by mistake and would phone me back. But of course she never did and it was me who had to phone her asking if there was any progress and even went once again to her office at the courts to complain about the matter. So in the long run I began suspecting the so very obvious: that my court case had intentionally gone missing because of that wrong conclusion reached by the Psychiatrists in their court reports on me for the fake they are, because I had made Psychiatrist David Cassar aware of this since long yet he kept me locked innocently in a mental institution and even worser kept drugging me with pills and injections, and of course should have learnt before not to expect anything better from such tyrant of Cassar - i.e. rather than allow me to have evidence in my hands to incriminate him, he rather better eliminate that evidence to instead leave me innocently locked in the tyrant way he is made to be. All this can be understood better from this link to an article on Magistrate Peralta - in the same way in that December of 2014 (roughly 6 months after he had sentenced me to Mount Carmel Hospital) he abusively made a Christmas party smuggling in the court building "bottles of alchohol" guarded by so many security and metal detectors, he, with the friends he has, could just as easily smuggle out of the court building my court case consisting of a bunch of papers and with no one to examine you on your way out!

All of a sudden I realized how stupid I was to not have suspected something of this sort from such a tyrant of Psychiatrist David Cassar from the very start and from such a fake legal system that we have, always ready to cover up the abuses of the priviledged class, of people in high positions, and those friends of friends, as had happened with Magistrate Peralta many years before by that fake Commission for the Administration of Justice (note how he "retired" by August 2015 probably to avoid this fake Commission the task of having to dismiss him for that 2014 Christmas party and maybe would have lost the pension of a Magistrate). For a moment I consoled myself with the fact that the wrong conclusion reached by the Psychiatrists had been quoted and reported by the media when my court sentence was given way back in 2014, and could be used as evidence. But at the same time seeing that our local media is so totally fake and biased as can be expected in a typical corrupt country since ever like Malta having intentionally spread so many lies on me (they used to refer to me as "cat killer" since long before the sentence was given, when in reality I never killed any animal), I questioned how could I ever use what was written by such fake media on this fact as evidence, i.e. if I was saying that the media intentionally lied on me on so many things, how could I at the same time consider such blatant liars as credible on another thing, in other words: "Falsus in uno, falsus in omnibus" or "false in one thing, false in everything" as the ancient Romans used to say. And for sure I could expect our just as well fake legal system to take full advantage of such dilemma to come up with similar excuses to further cover up those involved.

But when you find yourself in such situation, its your animal instinct which takes over. Seeing yourself so derided and treated like an animal, you reason it might as well act like an animal in that savage way end taking law in your hands to pay for the injustices you have long been suffering. As always, at the end it "comes down to a simple choice: Or get busy living or get busy dying." I had survived so many ordeals that rather than succumb to injustices at that moment, opted for the first choice, to keep on fighting all alone by myself, to find some way or another from where I could get a copy of those Psychiatrists' court reports with the wrong conclusion. The problem was that time was running out, but at the end I managed to get my hands in time on that thing - the experience I had gained before my 2014 arrest running around alone in the middle of the night to take measurements and photos in the church crypt for the love of my hometown, proved futile to recharge my adrenaline to risk it once more this time in my fight against injustice. In fact time was that short that couldn't manage in time to take the necessary photos (i.e. "the photocopies" needed), and so inevitably had to keep that thing at my end, and without knowing, ended having something complete with fingerprints rather that mere "photocopies" as had originally planned. When at one point had thought that everything was lost, it seems I had found that oar to grasp onto to keep myself afloat, and with that oar will hopefully one day manage to reach the shore alive to be able to further recount the ordeal.

The following are the emails I had sent myself and with the help of others to that Dr. Maria Dolores (Doris) Fenech to have digital proof that I had informed her of the possible inctricacies behind the intentional vanishment of my 2014 court case but obviously she never bothered replying, and thus with her silence and complete inaction in her role as some head of the court archives / registry is only confirming her direct involvement in the matter. Apart from this, to incriminate her further, I am also uploading the following recordings.

In the above recording of 6th April 2020, the man at the other end of the the phone when asked him to speak with that Doris Fenech, said she is working from home because of the Covid-19 and takes the details of my phone number to forward it to her to phone me back. But yet again, she didn't care to do this.

In the above recording of 23rd April 2020, more than 2 weeks later, the woman at the other end of the the phone when asked her to speak with that Doris Fenech, said she was not there that day (Thursday) and suggested that I phone her the day after as she was supposed to enter work.

In the above recording the day after on 24th April 2020, the man at the other end of the phone (probably the same one of the first recording) when asked him to speak to Doris Fenech this time didn't tell me she wasn't in office. Instead he probably contacted that Doris Fenech asking her if she wanted to forward to her my call. And guess, he came back telling me she has not entered work (when the woman to whom I had talked the day before told me otherwise) as according to him she is working from home also on that day (if it was really so he would have told me this from the very start as he did in the first recording above). In this call, despite telling him that she had to phone me in the past but never did, he suggested I send her an email, and despite once again repetetively telling him that she ignores them anyway, he nonetheless refuses to give me her phone number to contact her directly at home from where, according to him, she is supposed to be teleworking, even when told him of the severity of my case, namely that "my case vanished from the court archives and she didn't bother to take any action." To avoid being blamed for not taking his suggestion, I did just what he told me and with the help of others, my original email dated 2-Dec-2019 was forwarded in my name once again to that Doris Fenech but guess she yet again didn't even bother to reply. Again and again confirming her involvement in the matter with her silence and inanction. This email can be seen in the same link further above when I mentioned the emails sent to that Doris Fenech.

But if it is something to worry about seeing one like this Doris Fenech in her profession as a lawyer and in the position she occupies at the Court not bother at all and even ends incriminating herself, it is even more concerning if it is also coming from one within the Police Force, also not bothering at all on the matter, amongst others (see these emails to what I mean).